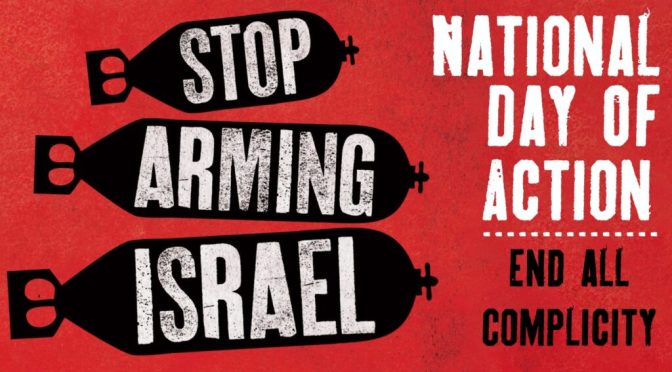 SIX YEARS ON FROM 2014: END ALL COMPLICITY, STOP ARMING ISRAEL!
11am SATURDAY 22nd AUGUST 2020
At HSBC Princes Street Edinburgh (foot of Castle Street)
6 years ago Israel concluded its aerial bombardment and ground invasion of besieged Gaza. The assault killed over 2,200 Palestinians, nearly a quarter of them children. Israel attacked densely populated civilian areas, destroying 18,000 residential units, and leaving over 100,000 Palestinians homeless.
Despite widespread condemnation of Israel’s deliberate and systematic targeting of the civilian population of Gaza, including by the United Nations, Human Rights Watch and Amnesty International, Britain continues to arm Israel. According to Campaign against Arms Trade (CAAT) between 2014 and 2018, the UK issued individual licenses for £364 million worth of military equipment and technology for export to Israel, as well as 20 open licenses, allowing unlimited deliveries over a 3-5 year period. In addition, the UK continues to purchase high-tech weaponry from Israel, advertised as battle-tested on the Palestinian people. As Israel continues to murder Palestinians with impunity, Palestinian civil society has called for effective action to hold Israel to account, including for a two-way arms embargo now.
But the chain of complicity runs deeper than the government. As revealed by our research both UK universities and local government pension funds invest in companies complicit in Israel’s war crimes, including companies that supply weapons to Israel.
In addition, financial institutions such as HSBC invest and provide financial services worth millions to companies that supply Israel with weapons. Including BAE Systems and Raytheon. Weapons with both BAE and Raytheon components were used in 2014.
All institutions have a moral duty to end their complicity now. They must all #StopArmingIsrael

The Palestine Solidarity campaign is organising a Day Of Action on 22 August with these instructions on how to participate
1. Print out the relevant graphics (below) depending on the size of your group
2. Stand outside HSBC, or at another relevant location while adhering to social distancing regulations
3. Take a picture, post across social media and use hashtag #StopArmingIsrael 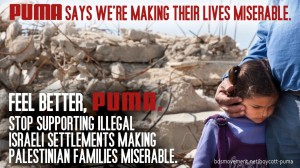 Research by Edinburgh Action for Palestine (EA4P) has determined that two Scottish football clubs have kit deals with Puma – Falkirk and Inverness Caledonian Thistle. Join us in calling on them to #BoycottPuma until they stop supporting Israeli war crimes. You can write your own letter or use the template letter here.

The IFA has refused to take measures to end its complicity in war crimes, despite being repeatedly condemned by UN advisors, dozens of elected officials, civil society and human rights groups representing millions and public figures. More than 200 Palestinian teams have called on Puma to end its support for Israel’s military occupation by terminating its sponsorship deal with the IFA. While Puma did reply to the Palestinian teams, it failed to even remotely address the issues raised.

As one of the world’s top athletic apparel makers, Puma’s sponsorship brings international legitimacy to the IFA and helps keep its direct involvement with violations of human rights and international law.

In July 2018 it was announced that Adidas was no longer sponsoring the IFA following an international campaign and the delivery of over 16,000 signatures to Adidas headquarters.

We can do this again. Join Palestinian athletes calling for a boycott of Puma until it ends its support for Israel’s illegal land grabs.

Research by Edinburgh Action for Palestine (EA4P) has determined that two Scottish football clubs have kit deals with Puma – Falkirk and Inverness Caledonian Thistle. Join us in calling on them to #BoycottPuma until they stop supporting Israeli war crimes. You can write your own letter or use the template letter below.

Copy & past into Word document to print and post, or copy & post into an email to send.

Or email, marking for the attention of Ross Morrison, Chairman Admin@ictfc.co.uk

I understand that your club is sponsored by the sportswear manufacturer Puma.

I am writing to make you aware of Puma’s complicity with Israeli war crimes. Puma is the main sponsor of the Israel Football Association (IFA), which, as documented by Human Rights Watch, includes football clubs based in illegal Israeli settlements on stolen Palestinian land. All Israeli settlements are illegal under international law.

Football has the potential to do tremendous good in bringing communities together, and can be an effective way of delivering social justice. I am sure your club believes in promoting universal principles of equality and wish to uphold the highest standards. This is why I implore your club to boycott Puma.

More than 200 Palestinian teams have called on Puma to end its support for Israel’s military occupation by terminating its sponsorship deal with the IFA. While Puma did reply to the Palestinian teams, it failed even remotely to address the issues raised.

As one of the world’s top athletic apparel makers, Puma’s sponsorship brings international legitimacy to the IFA and helps keep its direct involvement with violations of human rights and international law. Puma is directly supporting war crimes.

Please do not let your club have its good reputation tarnished through association. Please stand on the right side of history and sever any current or future links with Puma until they stop sponsoring the IFA.

I look forward to your response.

25th July: East London PSC: Why Palestine is Still the Issue: Webinar with Apsana Begum ,MP for Poplar and Limehouse, Youssef Awad from Jenin in the occupied West Bank, Rob Ferguson of Free Speech on Israel. You can register here, and join the Facebook event here.

Hosted by the brilliant Jen Brister, our fantastic line-up for this stand-up event features acclaimed comedian Mark Thomas, alongside Dana Alexander, Esther Manito, Jenan Younis, US based Palestinian Amer Zahr, and music by Efa Supertramp. Make sure to book now for this event featuring an exceptional line up for a great cause!

Proceeds will fund the work of Palestine Solidarity Campaign, the fastest growing campaign for Palestinian human rights and justice, in the UK and beyond.

Speaker Laila Hasan from the Women in Hebron cooperative.

Founded in 2005, Women in Hebron is a Palestinian non-profit fair-trade cooperative that was established as part of the Idna Cooperative Association for Embroidery and Handicrafts’ efforts to supply women in Hebron district with the resources necessary for the women and their families to provide for themselves through the production and sales of Palestinian handicraft items. Having grown from a small table along the main thoroughfare of the market to a permanent fixture in the Old City, the ICA has been able to open a small community center in the village of Idna, where members can gather together for educational and recreational purposes.

Travelling from Hebron specially to speak to the British public, Laila has made an arduous journey traversing Israel’s occupation barriers to be here with us and tell us her story: one of suffering and oppression, but equally rich in hope and vitality. An opportunity to hear about settler violence in the world’s most segregated city and resistance through craft, while helping to support the livelihoods of Palestinian women by browsing their handmade embroidery – this is a talk not to be missed.

Voices of Palestine is PCF’s national campaign to amplify the voices of Palestinians in the UK. We seek to re-centre Palestinians at the heart of their struggle for liberation, giving a platform to Palestinians to champion their own story, articulate their own discourse and reclaim the narrative through a series of events and videos. EUJPS is extremely excited to collaborate with PCF for this event! Click the ticket link to save yourself a spot at the event! We hope to see you on March 12 at the Muslim Welfare House. 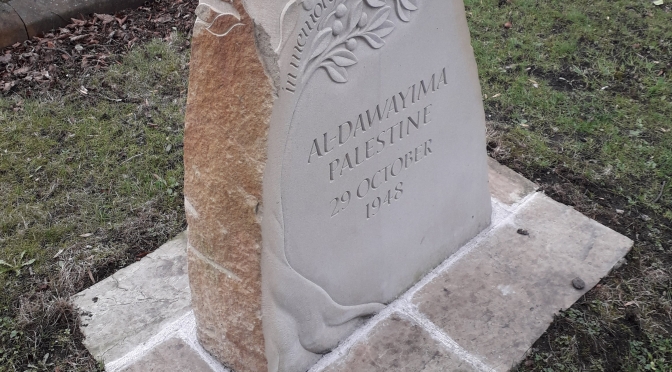 Regent Rd is a continuation of Princes St at the east end. From Waverley Station the road curves round to the right along the base of Calton Hill. The Park is to be found on your right.

“As we got up on the roofs … we saw a vast plain stretching eastward … covered by thousands of fleeing Arabs … The machineguns began to chatter & the flight turned into a rout.”

Account from an Israeli soldier present at massacre, quoted by Israeli historian Benny Morris in ‘The Birth of the Palestinian Refugee Problem Revisited’ (Cambridge University Press 2004) 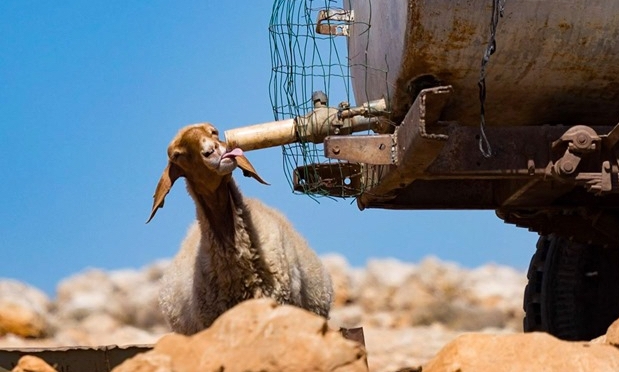 The event has now taken place but the organisers of the Edinburgh World Justice Festival filmed the talk – https://youtu.be/a_O-tEjMdXw.

Water as a tool of ethnic cleansing in Palestine

Dr Eurig Scandrett will argue that Zionist settler colonialism in Palestine has used access to water as a mechanism for the expulsion of the Palestinian population.

“180,000 – 200,000 Palestinians living in rural communities have no access to running water … [they] have no choice but to purchase additional supplies from mobile water tankers at a much higher price.”
Amnesty International, Troubled Waters: Palestinians denied fair access to water.

The Palmusic UK Ensemble will give its Edinburgh concert at 3pm on Saturday 6 July 2019 at the St Andrew’s and St George’s West Church, 13 George Street Edinburgh EH2 2PA.