SIX YEARS ON FROM 2014: END ALL COMPLICITY, STOP ARMING ISRAEL!
11am SATURDAY 22nd AUGUST 2020
At HSBC Princes Street Edinburgh (foot of Castle Street)
6 years ago Israel concluded its aerial bombardment and ground invasion of besieged Gaza. The assault killed over 2,200 Palestinians, nearly a quarter of them children. Israel attacked densely populated civilian areas, destroying 18,000 residential units, and leaving over 100,000 Palestinians homeless.
Despite widespread condemnation of Israel’s deliberate and systematic targeting of the civilian population of Gaza, including by the United Nations, Human Rights Watch and Amnesty International, Britain continues to arm Israel. According to Campaign against Arms Trade (CAAT) between 2014 and 2018, the UK issued individual licenses for £364 million worth of military equipment and technology for export to Israel, as well as 20 open licenses, allowing unlimited deliveries over a 3-5 year period. In addition, the UK continues to purchase high-tech weaponry from Israel, advertised as battle-tested on the Palestinian people. As Israel continues to murder Palestinians with impunity, Palestinian civil society has called for effective action to hold Israel to account, including for a two-way arms embargo now.
But the chain of complicity runs deeper than the government. As revealed by our research both UK universities and local government pension funds invest in companies complicit in Israel’s war crimes, including companies that supply weapons to Israel.
In addition, financial institutions such as HSBC invest and provide financial services worth millions to companies that supply Israel with weapons. Including BAE Systems and Raytheon. Weapons with both BAE and Raytheon components were used in 2014.
All institutions have a moral duty to end their complicity now. They must all #StopArmingIsrael

The Palestine Solidarity campaign is organising a Day Of Action on 22 August with these instructions on how to participate
1. Print out the relevant graphics (below) depending on the size of your group
2. Stand outside HSBC, or at another relevant location while adhering to social distancing regulations
3. Take a picture, post across social media and use hashtag #StopArmingIsrael

Research by Edinburgh Action for Palestine (EA4P) has determined that two Scottish football clubs have kit deals with Puma – Falkirk and Inverness Caledonian Thistle. Join us in calling on them to #BoycottPuma until they stop supporting Israeli war crimes. You can write your own letter or use the template letter here.

The IFA has refused to take measures to end its complicity in war crimes, despite being repeatedly condemned by UN advisors, dozens of elected officials, civil society and human rights groups representing millions and public figures. More than 200 Palestinian teams have called on Puma to end its support for Israel’s military occupation by terminating its sponsorship deal with the IFA. While Puma did reply to the Palestinian teams, it failed to even remotely address the issues raised.

As one of the world’s top athletic apparel makers, Puma’s sponsorship brings international legitimacy to the IFA and helps keep its direct involvement with violations of human rights and international law.

In July 2018 it was announced that Adidas was no longer sponsoring the IFA following an international campaign and the delivery of over 16,000 signatures to Adidas headquarters.

We can do this again. Join Palestinian athletes calling for a boycott of Puma until it ends its support for Israel’s illegal land grabs.

Witch Hunt is a film about the attempt to smash the most hopeful movement of our lifetime.

In 2015, while the far right was gaining ground around the world, socialist MP Jeremy Corbyn was elected as leader of the UK Labour Party in a landslide victory. Accusations of antisemitism within the party immediately began to circulate. Well-known anti-racists and left-wing Jews, such as Jackie Walker, were amongst the chief targets.

WitchHunt sets out to investigate the stories and the people behind the headlines, examining the nature of the accusations. Is this a witch hunt, as some claim? If so, who is behind it, and what is the political purpose of such a campaign? Has the media failed in its duty to fairness and accuracy in reporting on such serious allegations?  Through a series of interviews, analysis and witness testimony, WitchHunt explores the connections between the attacks on Labour, the ongoing tragedy of Palestine and the wider struggle against race-based oppression. It argues that if it is to mean anything at all, the fight against racism must  be a shared one that includes all peoples.

Contact the team at witchhuntfilm1@gmail.com to arrange screenings and discussions.

There are a number of events organised in March. These are not listed chronologically, rather grouped according to organisation, mainly in Edinburgh or Glasgow.

Throughout the month Edinburgh Action 4 Palestine will be holding  regular Saturday stalls from 11:00-13:00 at the corner of Castle Street and Princes Street,
And on the 24 March  will be holding the monthly Reflections of Justice & Peace, by the Awda Key, Palmerston Place, EH12 5AW , 6:15-6:30

The event is free, but tickets can be obtained from https://www.eventbrite.co.uk/e/from-balfour-to-banksy-divisions-and-visions-in-palestine-tickets-55981753933?aff=efbneb&fbclid=IwAR0uELIDRD0RQDqeS1INw3aD7t0Llci3XphGsyl7uGv0sRiNW0k6ulZSv8w

As part of the Palestine Alliance, EA4P are supporting the Scottish demonstration to mark Land Day: Equality, Freedom and Justice for Palestinians, Saturday 30 March, Assemble Foot of the Mound, Princes Street, Edinburgh at 2pm. https://m.facebook.com/events/608760759594953/

On Wednesday 6 March from 6-8pm Hadeel & Zaytoun are co-hosting two Palestinian speakers in the Hadeel shop, 124 George Street, EH2 4JN. The speakers will talk about Fair Trade in Palestine and the challenges local farmers must overcome for their craft.  https://www.hadeel.org/news/fair-trade-evening/?fbclid=IwAR3JkSSHeHVmhyWU2V71sKnYkestLrlS5Gox-oKzY9FoTN9s1mE-JnqFxoo

There are a number of events organised by Zaytoun to mark Fair Trade Fortnight. Check that out on Facebook (you don’t have to be on Facebook to access this)  https://www.facebook.com/ZaytounUK/

The Balfour Project http://www.balfourproject.org/  are holding two events in Scotland in March. The events are free but tickets are available through eventbrite.

The key is a symbol of the Right of Return (Awda in Arabic) for Palestinian refugees – a right enshrined in International Law.

Edinburgh Action for Palestine hold a short period of Reflection at the Awda Key, Palmerston Place (beside St Mary’s Cathedral), Edinburgh, at 6:15 on the 24th of each month.

We are there in sunshine and rain!

Visitors to Edinburgh – Palestinian, Israeli and others – also visit the key, see our gallery below.

Edinburgh Action for Palestine were delighted to welcome Nadia Hijab, a well known political analyst, author and journalist to Edinburgh on Sunday 28 October. Hijab is co-founder and board president of Al-Shabaka: The Palestinian Policy Network (https://al-shabaka.org/en/)

In her talk titled Remembrance and Resistance: How We Can Build a Just Future, Hijab acknowledged that in the midst of the various actions by the Trump administration like the move of the embassy to Jerusalem, the closure of the PLO office in Washington, the ‘deal of the century’, it is easy to feel despondent. She acknowledged the worrying alliances between Israel and anti-semitic politicians in Europe like Hungary (1) and Poland (2)  and the willingness of the Gulf States to ally with Israel, but she reminded the audience that there is also much to be positive about.

The international solidarity movement is strong, and getting stronger. After Oslo it became weak, but once it became apparent that Oslo was a dead end, particularly after 2000, the movement began to grow in strength again.

Hijab spoke of Israel’s attempts to control the discourse in the US and Europe but she does not believe that is working well. In the US many, particularly young, Jews are questioning the increasingly right wing policies of the Israeli government. Attacks on, and attempts to outlaw, the BDS movement are being challenged by those campaigning for free speech.

Within Europe, she continued, the European Union has resisted pressure from the US and Israel to withdraw from the Iran nuclear deal, instead working to secure EU-Iranian trade in the face of US sanctions.

Hijab also reminded her audience about Khan al Ahmar – it is a very small Bedouin village, the halt to the demolition and transfer of the population is only temporary, but it is important to recognise that the EU can exert some pressure on Israel.

Looking to the future, Hijab told her audience that the sources of power that Palestinians have are too weak to be able to negotiate a just settlement. She said that the question should not be one-state or two-state, but the issue is one of human rights based on international law.

Solidarity groups should be promoting the Boycott, Divestment, Sanctions, (BDS) movement and their call for freedom, justice and equality, upholding the simple principle that Palestinians are entitled to the same rights as the rest of humanity. We should demand our politicians uphold the law. 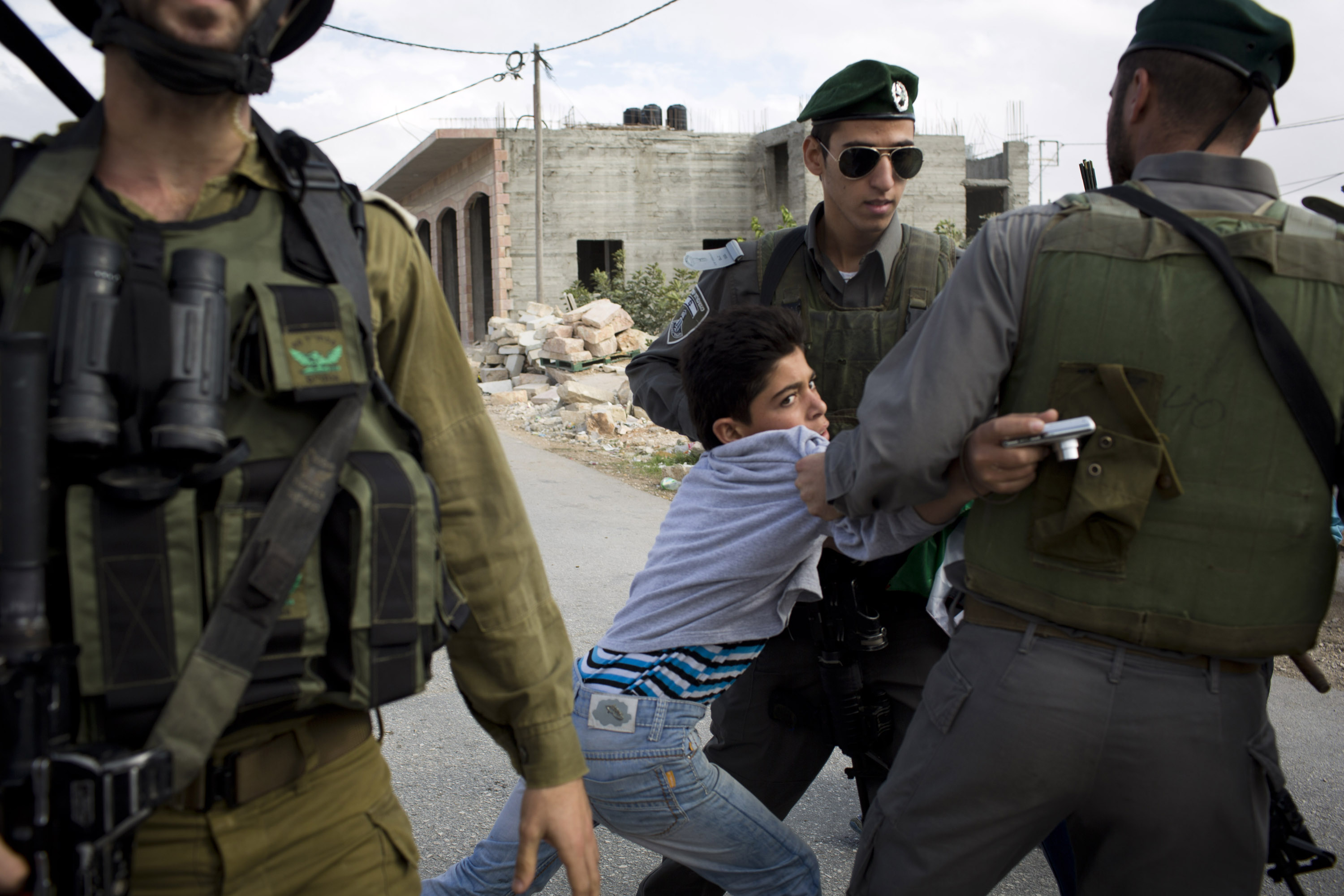 This weekly event is cancelled until further notice.

Please join us any Saturday between 11am and 1pm at our weekly stall.  We’re on Princes Street, at the corner of Castle Gate.  Anyone is welcome to help or drop even if it’s for a short time only.

‘Shireen of al-Walaja’, an intimate portrait of one of the village’s most prominent activists, presented by Daz Chandler (Australian filmmaker) on UK tour . ‘Children in Chains’, portraying Israel’s brutal treatment of school-age Palestinians, presented by Jon Pullman (UK filmmaker).
Screening followed by commentary from Palestinian academic, Dr Majdi, a specialist in child resilience.