Free entry at the door, but donations welcome

Musicians from Mohamed Najem & Friends and Nai Barghouti: Moments take a break from their UK tour to take part in a relaxed atmosphere to play and tell us of their life as Palestinians and musicians. Musicians from Scotland will also be adding to the creative mix.

Mohamed Najem & Friends and Nai Barghouti: Moments are touring the UK in July (see here for details) ). In a unique double bill, they bring the freshest Palestinian sounds to the UK. Nai Barghouti returns to the UK joined by some of the best young musicians in Palestine. Paris jazz band Mohamed & Friends complete their first UK tour, fronted by Palestinian clarinet and nay player Mohamed Najem. In an age of barriers, these musicians preach unity and inspiration at its finest. 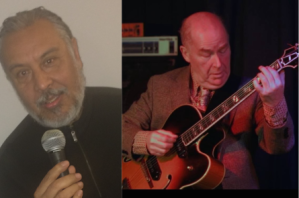 Tickets:  Tickets for £5.- available at the door. Proceeds from this concert will be going to the village of Bil’in.

Freddie was moved to give this concert after hearing Palestinian Iyad Burnat at a meeting in May this year organized by Edinburgh Action for Palestine.

Iyad comes from Bil’in, a village in the West Bank in Palestine. He gave an account of the non-violent resistance by Bil’in to the illegal confiscation of the village’s farmland, the wall that separates the villagers from their olive trees, and the Israeli occupation.

Freddie was shocked that there were many casualties among the villagers in the village’s weekly demonstrations including a young boy being shot and a young man killed. He would like to contribute his music to raise awareness and funds for the village. He and his friend Lachlan will perform a concert in honour of the villagers who have been killed and injured and also their families.

Iyad Burnat is a native of Bil’in in the occupied West Bank, and a founder of the Bil’in Popular Committee. This citizen’s group was formed in 2004 to deal with the regular raids by the Israeli forces and sought to slow down the theft of Bil’in’s olive trees and the confiscation of farmland. The village’s fight for survival was documented by Iyad’s brother, Emad Burnat, in the Oscar nominated documentary “5 Broken Cameras”.

Iyad Burnat has been a leading proponent of a non-violent peace protest against the Separation Wall.  Under his skilful eye he has captured the images of occupation and documented the ensuing violence meted out to the protesters, young and old. Iyad was the recipient of the James Lawson Award for Achievement in the Practice of Nonviolent Conflict 2015.

This will be his fourth tour of the UK having travelled worldwide previously.  His beautifully written book with stunning photographs “Bil’in and the Nonviolent Resistance” will be available to purchase; it tells the story of the struggle. We are delighted to have him joining us and telling us his story. 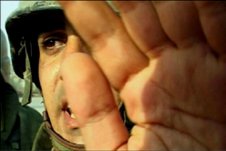 At the next monthly Cafe Palestine, Edinburgh Action for Palestine will show the documentary film “Avenge, but one of my two eyes” by Israeli film maker Avi Mograbi. There will be time for discussion after the film, as well as tea, coffee and cakes.

In this movie, Mograbi juxtaposes footage of Palestinians being humiliated by Israeli guards with scenes of Jewish tourists being regaled by tales of their ancestors’ historical struggles for freedom. Focusing on the oft-retold stories of Samson (who, after being blinded and humiliated by the Philistines, knocked an entire temple down to crush his oppressors) and Masada (the site where over 900 Jews committed suicide to resist becoming slaves of the conquering Romans), the director highlights the hypocrisy of his fellow countrymen for celebrating these ancient tales as they simultaneously condemn the Palestinians for acting out in a similarly violent manner. (see http://dafilms.com/film/8062-avenge-but-one-of-my-two-eyes/)

Colin Cooper will be presenting about his recent visit to Gaza during October 2016. Colin was formerly a GP in Edinburgh, and has been a member of Edinburgh Action 4 Palestine. He has visited Gaza six times since 2009. His recent visit, as a member of Edinburgh Direct Aid and Medical Aid for Palestine, focussed on palliative care in Gaza, where hospitals are struggling to provide end of life care in the face of brutal sanctions, which deprive patients of many essential medicines.

There will be tea and coffee and an opportunity for discussion.

Our monthly Cafe Palestine will welcome guest speaker Nick Evans, a Town Planner and Geographer, who visited the occupied West Bank earlier this year and will speak about his impressions from the perspective of a Planner. As usual, there will be tea and coffee, cakes and plenty of time for discussing how best to support Palestinians and their struggles for justice and self-determination.

On 18th November,  Edinburgh Students for Justice for Palestine are hosting a Night of Palestinian Culture at Teviot Underground at the main university campus:

“For just £5 you can join us for a night of falafel, homemade food, music, henna, traditional custom-made goods for sale and more, ALL THIS with a contribution to Medical Aid for Palestine.
The schedule for the night will be up shortly and tickets will be sold starting from next week!
Don’t forget to buy £1 raffle tickets for the chance to win wonderful prizes from Maqbools, Word Power Books, Jordan Valley and More”.

On Sunday, 30th October, Edinburgh Action for Palestine held a commemoration of the massacre of over 100 inhabitants of the Palestinian village of al-Dawayima on 29th October 1948.  It was held meet by a memorial plaque for al-Dawayima which was laid by the the Lord Provost in 1998 on Melville Drive.

Earlier this year,  a letter by one of the Israeli soldiers who had taken part in that massacre was published in full.  It stated: “There was no battle and no resistance (and no Egyptians). The first conquerors killed from eighty to a hundred Arabs [including] women and children. The children were killed by smashing of their skulls with sticks. Is it possible to shout about Deir Yassin and be silent about something much worse?”   See here for a Mondoweiss article with more details.

Edinburgh Action for Palestine will be holding its regular Cafe Palestine on the last Sunday of September, from 4-6pm, at the Peace and Justice Centre, 5 Upper Bow, Edinburgh EH1 2JN.

We will be showing the film “Arna’s Children”, produced in 2004. The film is set in the Jenin refugee camp in the West Bank. It focuses on a theatre group for children in Jenin, set up by Arna Mer Khamis to help the children express everyday frustrations, anger, bitterness and fear. The film then returns to Jenin after the Israeli’s massacre of 50 Palestinians there in 2002. Click here to read a review of the film.  There will be time for discussion and for refreshments, too.